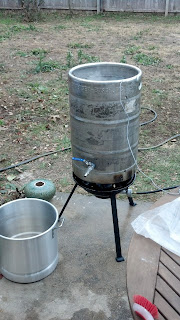 Having the entire week off during the holidays gave me some time to get some long overdue brewing done. I was able to finally finish my keggle, although it still needs a little work so it is not so sharp, and brew two beers I’ve needed to brew. The first was the sours that I had planned to brew during the summer when I collected dregs from our tasting one night. Well once we decided to move and buy a house I didn’t want to brew anything and have to move it. Then when we moved I was too busy to brew at first and wanted to brew some other things that I would be able to drink right away. Long story short I should have brewed these sooner but I finally got around to it.

The dregs that I had been storing in growlers may or may not still be usable. I did top them up with fresh wort every now and then, but when I decanted the top the day before brewing they were incredible sour. I think due to the warm temperature and extended time the Pediococcus produced too much acid and may have killed everything in there. But on the plus side by waiting so long I was able to obtain some Cantillon dregs from a Cuveé des Champions from our Night of the Sours Pt. 2 tasting. I was hoping to have two different sours, one from Beatification dregs and the other from Drie Fonteinen Zomer. But if they are not still viable then I should still end up with two different beers if I barrel age one carboy and not the other. 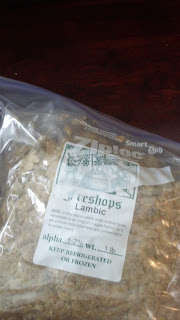 I decided against doing a turbid mash for this beer but did try to stick to the basic Lambic recipe. I used about 2/3s Belgian Pale malt and about 1/3 Wheat Malt. Since I’m not doing a turbid mash I did not get unmalted wheat. I also used the aged hops that I purchased a few months ago for bittering hops at the rate specified by Jean van Roy (5 grams/liter).

I came in slightly under gravity, I’m pretty sure I have discovered the reason I have been lately, but this time it was because I accidently spilled some of my first runnings. The brew day was uneventful and the keggle preformed beautifully. The only issue I experienced was chilling 10 gallons of wort without a pre-chiller takes a long time. After I collected the wort I used the yeast from my 100% Brett-B IPA to trigger fermentation and the yeast from my BA RIS (WLP001). Oddly enough it took about 3 days for fermentation to finally take off, I was about to use some of the Saison yeast I had to trigger fermentation until I noticed it had started. After two days of fermentation I poured the dregs of the Cantillon into each carboy.

It’s nice having the option to brew ten gallons if I need or want to now. My plan is to let the beers ferment out and then rack one of them into my barrel for extended aging.

Notes:
(12/27/12) – Brewed by myself. Easy brew day aside from getting used to my new equipment. Chilled to 90oF degrees and racked to carboys. I placed the carboys into the chest freezer at 59 degrees and left them to cool for 3 hours. The bottle I saved from the Brett-B IPA was added to each carboy.

(12/30/12) – Activity finally started; there is a nice fluffy white krauzen on top of the wort. In the evening I added the dregs from the Cuveé des Champions evenly into each carboy.

(1/13/13) - Racked one carboy into the barrel that recently held the barleywine. I cleaned the barrel by pouring boiling water into it.

(4/3/13) - Moved the carboy from the chest freezer to the beer room upstairs while I'm cold crashing the IPA. I'll leave it up there a while then maybe move it back down to the chest freezer.