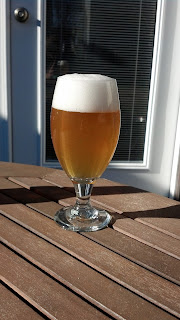 This beer was the second 100% Brett beer that I have brewed. This time I decided to up the ABV and the bittering hops and make it more of an IPA then a pale ale session beer then the first attempt. I also used a different yeast strain, which some people say produces more funk. I was very happy with the way this beer turned out.

Appearance: The beer pours a hazy golden yellow with orange hues and a dense white head that slowly fades and leaves a nice lacing over the top of the beer and along the sides of the glass. I’m really happy with the appearance of this beer.

Aroma: A big nose of citrus, grapefruit, peach and pineapple. The dominate aromas are different citrus and peach. This is the second best dry hopping job I have done. I think the water chemistry has really helped me with my dry hopping aroma.

Taste: Citrus and grapefruit are the predominate flavors with a touch of Brett-y funk. The bitterness comes off smooth and assertive without being overwhelming and abrasive. I was worried that it would end up being grassy again since I had to dry hop with pellet hops. No grassy notes to be found.

Mouthfeel: Personally I think the perfect level of carbonation for this beer. A medium level of carbonation that is refreshing and tingly without taking anything away from the beer. It finishes dry with a nice lingering bitterness. I’m glad that it doesn’t feel watery, which can happen with Brett because it does not produce a lot of glycerol and that is a fear I have with 100% Brett beers.

Overall: Although I do not brew IPAs often (I would prefer to only keg them due to their rapid fall off rate) this is easily the best IPA I have brewed and easily one of the best beers that I have brewed to date. The bitterness comes off perfect, aggressive, without being overwhelming and pallet stripping. I think my biggest improvement in dry hopped beers has come from my usage of water chemistry. This is something I want to continue to improve on as I continue to brew.
Posted by James at 9:20 AM