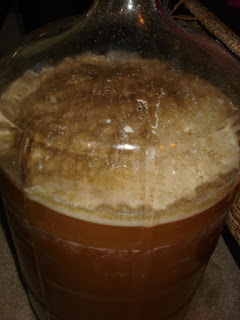 I wanted to brew something that was light and refreshing for the summer, but I wanted it to also be complex. My original thought was to brew a saison with Brett, a la, Boulevard Saison-Brett. The only problem it was April and in Texas that means it’s almost summer so I don’t have enough time to wait on the brett. After some research, mostly reading Chad Yakobson’s (head brewer for Crooked Stave) master thesis on Brettanomyces, I decided to do my first 100% brett fermentation. I want something that is fruity and slightly tart or acidic.

I’m using my grain bill from the saison I brewed last year with slight modifications. Instead of candi sugar I’m using acidulated malt and instead of being a 6 gallon batch I’m brewing a 10 gallon batch (since I want it to be a low gravity beer, perfect for hot summer days). I’m hoping that the acid malt will add a slight tartness to the beer. According to Chad he has observed a somewhat symbiotic relationship between Brett and acid. He also mentioned that Brett (at least Brett-C) will produce acidic acid when in the presence of oxygen. To test this I decided to split the batch into two 5 gallon carboys and aerate one but not the other. I also decided not to go with the same hops as I used in my saison but rather to go with New Zealand Motueka hops, which are said to provide a citrus, fruity, aroma and flavor. To really accentuate the citrus feeling I’m going to dry hop it with Citra hops, since I couldn’t pass up buying half a pound the other day. To match with the Citra hops I went with the Brett-C strain, which is known for its fruity aromas produced, such as pineapple and hints of citrus.

The brew day was pretty straight forward; I finally think I’ve fixed my leaky mash tun. As for the Brett-C I made a starter about two weeks in advance since Brett takes a while to get started. According to Chad he believes its best to get the Brett acclimated to an alcoholic environment. I also used White Labs Brett-C which is known to be a small cell count in the test tube. They say it is because Brett is normally pitched in secondary and does not need as high of a cell count, which is true, unless you are using it as the primary strain. After a week of fermenting I decanted and topped up with more wort at a slightly higher gravity.

(4/28/12) – Brewed by myself. Easy brew day except for the fact that we were having a party later that night so I was also cleaning and attempting to make pretzels while brewing. Chilled to 80F, aerated one carboy, pitch the yeast into each carboy. I forgot to take a gravity measurement so I’m not really sure if they were at my target or if they were the same. I’m assuming that the OGs are not the same since they are two different volumes and I added different amounts of water.

(4/29/12) – Fermentation took off with about an inch thick layer of krausen in each carboy. The non aerated version was white with large bubbles, whereas the aerated version was a darker shade with smaller bubbles and what appeared to be hop particles suspended on top.

(5/15/12) – The krausen has disappeared and the fermentation has slowed. There is an occasional bubble from each air lock, but for the most part silence.

(6/7/12) - Added about another ounce of whole leaf citra hops to each carboy.

(6/10/12) - Racked part of the aerated beer into a gallon growler on thawed frozen rhubarb. I used half a pound of frozen pre-sliced rhubarb. The rhubarb was not sanitized. I accidentally spilled some on the floor in the process and it smelled amazing. Fresh tropical fruit abound. I also poured some into a glass for a taste test and was surprised by the tartness that was there. Maybe the aeration worked, it will be interesting to compare to the non aerated version.

Tasting: Loved it and it’s a great session beer.
Tasting: The rubarb provided a nice tartness that I wanted. Although I would say there was a slight vegetable after taste that I was not too fond of.
Posted by James at 9:25 AM