This will be the first in what will probably end up being a continuing series or beers. I’m calling it my Yeast Series. The plan is to every now and then brew a 10 gallon batch and split it up into two different carboys and add different yeast. Brewing the same beer and using different yeast should highlight the differences between the yeast. The plan is to try to compare ale yeast and Brett. Brettanomyces primary fermentations are still new to the brewing world so my goal is to provide a comparison between an Ale stain, something familiar, and a Brettanomyces strain. The recipe will vary as will the yeast but it will at least give a comparison for how the two yeast strains behave in a similar beer. 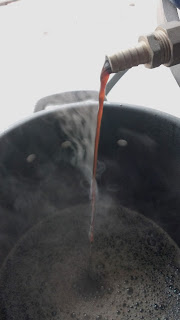 For the first installment I chose to use two yeast that I have brewed with in the past. This experiment is interesting because each strain is a commercial strain that is not used for this type of beer. I chose to use the Conan strain and BKyeast C2 in a Black IPA. I’ve read that Brett will perform different with the introduction of dark malts so it should be interesting to see if this is true or not. Conan, on the other hand, is used for only one beer on the commercial side, so it will be interesting to see how it behaves with the introduction of dark malt.

The two yeast are known for producing fruity aromas, strawberries most noticeably for C2 and peaches for Conan. To pair with this I chose to experiment with Mosaic hops, which are known to produce blueberry flavors and aromas and Centennial, which I thought would provide a nice citrus compliment.

I’ve never brewed a black IPA before but the ones that I like tend to be low on the roasted flavor and aroma. They are practically regular IPAs with some dark coloring. To replicate this I tried a technique used for dark lagers. Well I guess technically dark lagers use a cold mash technique, so this is a riff on that technique. I used de-husked Carafa III because without the husk the sharpness should be cut down along with the astringency. I also decided to add it to the last 15 minutes of the mash to minimize the roasted aroma and flavor pick up from a full mash. Everything went smoothly until the end when I noticed I needed to change one of my tubes on my wort chiller, which only slowed me down a little bit and forced me to multitask. I forgot again to add sugar at the 15 minutes mark but I did remember at flame out this time instead of 30 minutes into my whirlpool so I was able to integrate the sugar. Oddly enough I over estimated my evaporation rate so I ended up with about 1.5 gallons extra wort.

This was also the first beer that I’ve brewed where I took pH into account. I’ve been reading about pH adjustment and I’ve been making salt adjustments for a while but I’ve yet to adjust my pH. I received a pH meter from my wife for Christmas, but I didn’t use it when I brewed this beer. However, I did make calculation prior to brewing. In Texas we have really alkaline water, so it is normally necessary for us to add acid to the mash, and it’s especially important to do it when brewing an IPA. If you ready my tasting notes on my Heady Clone you’ll see that I felt the bitterness was a little sharp, which I’ve attributed to the alkalinity of my water. The best IPA I brewed was my 100% Brett-Brux IPA, where I added acid malt because I thought it would be good for the yeast, not knowing that it probably helped with the perceived smoothness of the bitterness. My estimated mash pH this time was 5.3, whereas my calculated pH from the Heady clone was probably closer to 5.8-5.9. I also bought some lactic acid to add to my sparge water to lower the pH so that I don’t extract tannins from the grain husk.

Without further adieu, here are the details 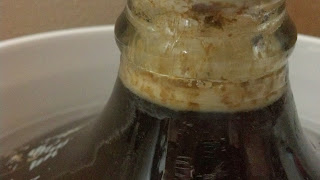 Notes:
12/26/13 - Brewed by myself. Easy brewday, hectic at the end. Mash only hit 149oF because I forgot that I would lose some heat since it was cold that day. Added 8 grams of Gypsum and 2 grams of Calcium Chloride along with 10mL of lactic acid to sparge water. Chilled to 58F and added 1.5L starter of each yeast separately to the carboys. Didn’t add any extra aeration to the Brett version. Both carboys are way to full so I covered with foil for overflow. Before I added the Conan yeast I took a quick smell and it was very Belgian like. I've read people mentioning this phenomenon when it ferments above 70F but I've never seen it myself until now.

12/27/13 – Fermentation of the Conan has taken off. Lots of blowoff, trying to keep fermentation at 68F using a water bath and ice cubes during the day.

12/29/13 – I was worried that fermentation had not started in the Brett IPA so I looked up my notes from the Cantillon IPA. I remember the fermentation being strange and this beer is following the same fermentation schedule. A krausen has started to form under the pellicle and is pushing it up as you can see in the picture.

1/1/14 – Fermentation has started to take off for the Brett IPA and the krausen is slowly coming out of the top. It looks like a barrel fermentation you would see in Cantillon’s cellar. Very slow, with a strong stability, it’s not like a normal ale blow over. The krausen is stays together and falls in chunks.

1/5/14 - Finally able to put my air lock on the Brett IPA. Fermentation of the Conan version seems to have slowed about two days ago.