I’ve loved Founder’s Breakfast Stout for a long time. I feel it has the perfect balance of chocolate, coffee, and beer. All of the flavors are integrated well and nothing is truly over the top. I also enjoy that it’s an Imperial-ish stout that is not sweet, even with the chocolate addition. The coffee comes across as fresh coffee without the astringency, which I feel is both a testament to their process and the coffee that they choose to use. It also has an amazingly rich and creamy body and mouthfeel that makes it the perfect winter sipper, plenty of reason for me to attempt to brew something similar. 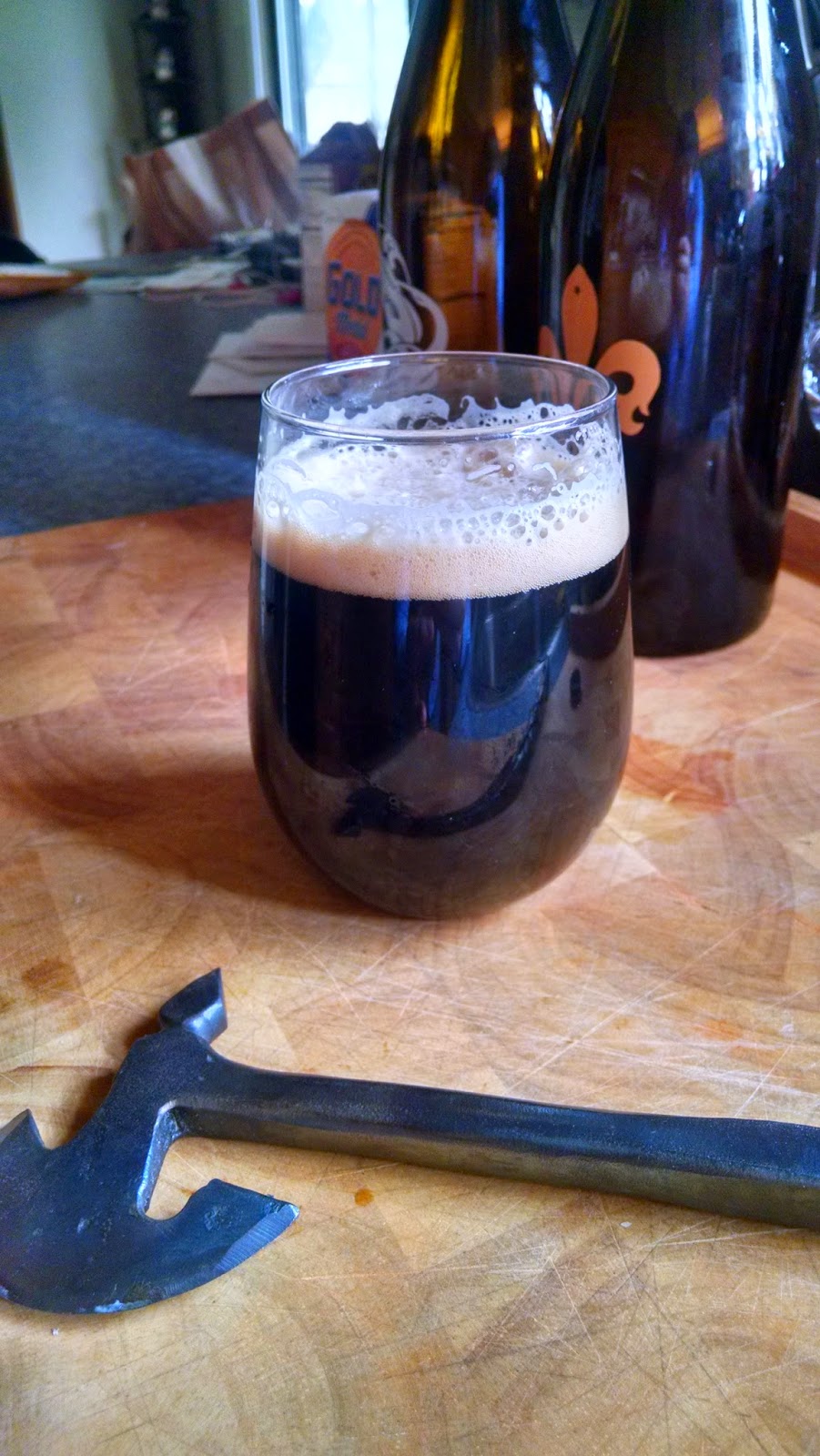 My first example of this beer was pretty good, but it was very early in my brewing career, so I figured I would take another crack at it. Plus what’s better than to have 5 gallons of Breakfast stout on tap in the winter (even if its winter in Texas).

Appearance: Pours a viscous black with a slightly off-white tan head about a centimeter thick that slowly fades to a thin lacing over the top of the beer. It certainly looks the part of a big Imperial stout. There isn’t much head that is produced when pouring due to the lower level of carbonation (and my issues I’m having with the keg) but its spot on for the mouthfeel.

Aroma: This is where the coffee shines though. I specifically chose a coffee that I thought would complement the flavors of the beer and was fresh. I went with a Mexican blend from Intelligentsia for its aromatics, subtle chocolate flavors, and low astringency. The aroma is a combination of fresh coffee beans, dark chocolate, caramel, and some roasted notes. I think the aroma is spot on for a FBS clone, only the coffee is fresher and more vibrant, not that it’s Founder’s fault.

Flavor: This is where the chocolate shines through. When I first took a sample for my gravity reading I was worried that the chocolate was going to be overwhelming and too sweet, but luckily that faded and it balanced itself out. The flavor is predominantly dark chocolate with some coffee notes and a lingering bitterness. I would say that the bitterness is probably too high for the style, but its right where it should be for FBS. One of the things I like about FBS is the bitterness is on the high side, which I feel keeps the beer drinkable as opposed to cloying sweet. The bitterness comes across as a dark chocolate bitterness not as hop bitterness and it is not astringent.

Mouthfeel:  Despite the issues I’m having with my leaky keg I’m able to keep the carbonation exactly where I want it. Low-medium carbonation that accentuates the creamy mouthfeel and full body of the beer.

Overall: Personally I think I nailed it this time. I tried it next to FBS with a friend of mine and next to Austin Beerworks Spudnik and unanimously my beer was favored. Honestly I felt weird thinking that my beer was better, but it was hard to disagree, the flavors and aromatics were just brighter and fresher. I really don’t have anything that I feel like needs to be improved, other than using a keg that doesn’t leak CO2.  If you’re a fan of FBS I recommend brewing this beer.
Posted by James at 8:40 AM