Flip top vs. Bottle Cap: Round 2 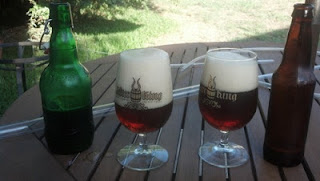 I know it has been forever since I’ve reviewed the two different bottle types but I finally got around to doing it again. This is the second review for an experiment that I have been conducting over the past year and a half. For more information on this experiment and the background you can read here. The reason I didn’t get around to doing the experiment like I initially wanted to be because the bottles got lost under my stairs, buried underneath all the other stuff.  I opened chilled the two bottles the night before for 24 hours and opened them side-by-side at basically the same time and poured into identical glasses.

Appearance: Large head about 2 fingers thick that dissipated relatively quickly probably over the course of one minute. I was surprised by the sound of the pop that came when I opened the bottle.

Aroma: Slight hints of oxidation, port like qualities, burnt sugar, caramel, and raisins. There was a slightly metallic aroma but nothing too distracting.

Taste: Similar to the smell with hints small notes of metal, this from what I can recall was originally found in the beer.  Other than that the flavor has held up well, caramel, raisins, a touch of chocolate.

Mouthfeel: Surprisingly carbonated still, very effervescent and light. The carbonation might be too much for its own good.

Overall: It held up surprisingly well. I would still drink this beer. I doubt it will hold up too much longer since I did start to detect a hint of wet cardboard in the aroma, so I’m assuming the end is near. Although I do think that would be attributed to the bottling process and not from aging in the bottle.

Appearance: Similar color but with a huge head. I had to wait for it to slowly dissipate before I could pour more. The pop was very loud when I opened the top and the beer started to foam up.

Overall: I had to pour the rest of the glass out since it was definitely past its prime. I’m not sure why this beer was more carbonated then the other, I doubt it’s infected, but it’s possible. I’ll hold onto the other two just to see if that changes at all.

I’m not aging these beers to see how they change but see how the different bottles affect their overall taste, smell, appearance, and mouthfeel. I think at this point there is a clear verdict. Capped bottles prevent oxidation longer then flip top bottles. I’m not fully against flip top bottles. I generally keep one around when I bottle to put the last amount of beer into it since it probably won’t be a full bottle and I don’t feel like wasting a cap on a half full bottle. It also gives me the chance to check for carbonation without wasting a full bottle. I will continue the experiment just to see how they continue to evolve but my recommendation is to only use flip top bottles if you going to be storing them for short term consumption. I just don’t believe that the rubber gaskets provide as good of a seal as a cap. It will be interesting to see what the beer is like next year.