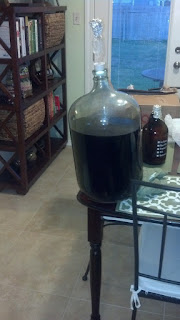 For this year’s pumpkin beer I wanted to do something different. Last year I brewed a traditional pumpkin ale, ah la Dogfish Head Punkin. This year I wanted to do something different. For one I didn’t want it to be really high in alcohol. We serve it for our pumpkin party and if there is leftovers I didn’t feel like getting stuck with something that will get me drunk with one bottle. I also tried a new pumpkin addition technique to add to the pumpkin flavor and aroma. I needed to brew it in time to be ready for the pumpkin party so I had to brew it before pumpkin season (about a week to early). So I bought some cans of Libby’s pumpkin puree since it is 100% pure pumpkin. I added the pumpkin to the boil and to the mash. Next time I do that I’m going to use hop bags, what a mess that turned out to be. First I had a stuck sparge, first one ever, and ended up dislodging my manifold while trying to stir the mash and had to use a hop bag to prevent all the grains from getting into my boil kettle. Then the pumpkin in the boil was a pain to get the beer into the carboy. In the end I just dumped most of it into the carboy knowing I could rack it off later. I decided I didn’t want to use the traditional pumpkin spices for aroma, instead I used a Belgian yeast blend, which I hoped would produce a “spiced” aroma. To top it off I decided to attempt to enhance the gourd flavor by adding lactose sugar at bottling. This was an idea I got from the Bruery Burly Gourd. Maybe next year if I have time I’ll brew early enough for a sour pumpkin ale.
Grain Bill:
Hops:
Yeast:
Notes:
(9/8/12) - Brewed by myself. This was a rather eventful brew day. Stuck sparge and pumpkin goop in the carboy.

(9/22/12) - Racked from one carboy to secondary to get the beer off of the pumpkin goop at the bottom.