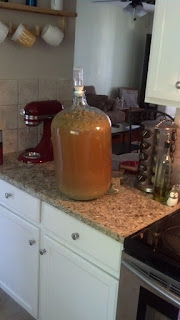 Finally that we are finished moving into our new house I was able to brew again. I still had some Citra hops left over from the 100% Brett beer and it was still warm outside so I figured I would brew something that doesn’t take that long to be ready as an end of summer beer. My idea was a dry-hopped hefeweizen. It was interesting brewing again since I had a routine down at the apartment but not at our house. It was nice brewing in the backyard since I have a water hose now and I don’t have to bring everything inside to clean it in the shower. The only problem was that I had to figure out where to put my mash tun, luckily I discovered that I could put it on a table that I welded in high school and it worked perfectly. I did encounter some issues while brewing that I have yet to figure out. I came in way under my target gravity, which is either because I sparged with too much water or I didn’t get enough grains from my LHBS. My mash calculator is usually pretty accurate with its calculations and I didn’t change anything since I’m using the same equipment so my only assumption is that I was not given enough grain from the homebrew store. I would attribute that to the fact that they opened a new store and they have new employees, since I never had this problem at the old location, probably just an honest mistake. No worries here I always love a good session beer.

Grain Bill:
Hops:
Yeast:
(9/3/12) – Brewed by myself. Uneventful brew day other than the fact I was way under gravity. Forgot to use my hop bag during the boil so it took me longer then I wanted to rack to the carboy. Cooled as low as I could, about 80 degrees (I really need a plate chiller) waited a few more hours for it to chill a little more in my house and pitched the tube of yeast. No starter needed for this yeast.

(9/8/12) – Racked to the secondary to make room for this year’s pumpkin beer and added the Citra hops.