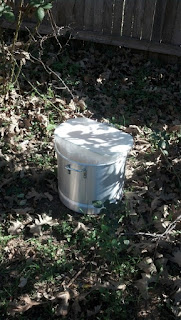 Ever since I developed a taste for sours, dare I say it, craving, I’ve admired the traditional process. There are very few breweries left in the world that produce sours in the traditional sense. Probably the most famous is Cantillon. Sours can be produced in many ways, as evident by American sour producers. I’m lucky that I live in San Antonio and am close to Freetail, one of two sour producers in Texas, the other being Jester King in Austin. With Texas’ weird beer laws I’m able to buy Jester King at a retail store but I can only buy Freetail at Freetail. This is why I’m lucky to be here; those living outside of San Antonio only have access to Jester King for sours.

Traditionally sours or wild ales are produced by allowing the natural microflora in the air to inoculate the wort while the beer is cooling in a large trough called a coolship. As the beer cools the wild yeast and bacteria in the air cause the beer to “spontaneously” ferment. After a 24 hour cooling period the beers are racked into barrels, which themselves are home to “bugs” from previous successful batches to ignite fermentation. The prevailing thought was that the traditional style of wild ale, Lambic, could only be produced in Lambeek, Belgium.  It was believed that the microflora in the air in this region has the right concentration to produce Lambic and that no other region in the world can replicate this. We know now that the bacteria and yeast in the air in Belgium is nothing special.  The Belgian Lambic producers are able to produce world class beers because their brewery has an established microflora and they have many years of batches that they can use for blending.

There is a group in Belgium that formed a coalition, whose name escapes me, that believes Pajottenland is the only place that Lambic can be produced. It is a group of traditional Lambic producers, Girardin, Boon, and a few others. Arguably the most famous producer of Lambic, Cantillon chose not to participate because they believe that Lambic is just a process and can be produced anywhere. There are a few breweries in America that have tried their hand at spontaneous fermentation. Jolly Pumpkin, Russian River, and Jester King have all inoculated some of their beers from a stepped up batch of spontaneously fermented wort. Allagash actually has installed a coolship and has been producing wild ales with it. 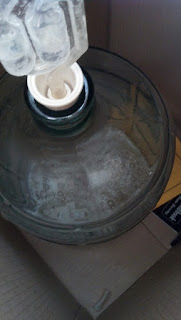 Most spontaneous fermentation producers agree that the best times to ferment beer is fall through spring. This is when they say the right balance of microflora is in the air. During my last brew day, Brett-Brux IPA, I had some left over wort from the mash tun and decided to try my hand at spontaneous fermentation. I collected the wort and boiled it with some old hops, mostly to keep the lacto in check. After the boil finished I poured the wort into a sanitized Pyrex baking dish and covered it with a sanitized cheese cloth and placed the “coolship” under our rose bushes in the back yard elevated by a bucket. I left the beer over night to cool and poured it into a sanitized carboy the next morning. The only aeration came from pouring into the carboy. I then capped the carboy with an airlock. It took about 2 or 3 days for fermentation to show. Currently there is a nice pellicle on top of the wort. I’m going to let it sit and ferment for about 3 weeks then give it a smell test. If it doesn’t smell awful I’m going to try a taste. You never want  to taste spontaneously fermented beer early because there are other types of bacteria that could be living in it early, ie e.coli. After a few weeks the alcohol and acidity will kill any pathogen.   If this works out then I’ll step the bugs up and use it to inoculate a full size batch. Who knows maybe in 2 years I’ll be able to drink my own Lanbintonio. If the starter doesn’t work out then I didn’t invest a lot of ingredients or time and I’ll learn what didn’t work.