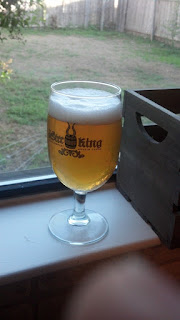 Appearance: Clear, pale yellow with a huge head about three fingers thick. This time I upped the carbonation and it shows. I was actually surprised that there was no color picked up from the rhubarb.

Aroma: The aroma is similar to the other version, pineapple, guava, a hint of green apples and funk. I don’t really think you can smell the rhubarb, some people say they can, but I’m not sure if they would be able to if I didn’t tell them there was rhubarb in it.

Taste: Definitely tart. This is what I was hoping would happen. The beer is tart and a little funky with a touch of vegetable on the back end. I think the time on the rhubarb needs to be shortened to avoid picking up a vegetable flavor.

Mouthfeel: The carbonation is higher and there is a nice dry finish. I was surprised that with the low alcohol and dry finish that the beer didn’t feel watery.

Overall: This is what I was hoping would happen when I added the rhubarb. To me it was kind of a quick Berliner, obviously it lacks the complexity that bacteria would provide. It does, however; provide a quick alternative to souring that doesn’t involve bacteria or a long wait. I would probably use this process in the future, only I would rack off of the rhubarb earlier.