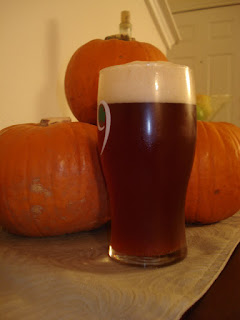 Well better late then never. My pumpkin ale has actually been ready for a while, I just haven’t had time to post a review of it yet. I pretty pleased with the way it turned out and it was perfect for the pumpkin party that we hosted a few weeks ago. There are a few things that I might change next time, if I decide to brew this recipe again. Next time I brew a pumpkin ale I will probably take the roasted pumpkin and put it in my food processor before adding it to the mash. I don’t think enough of the pumpkin was extracted by just tossing in the cut up pumpkin. I think I will also cut the pumpkins in half and roast them before slicing them up. Prior to the pumpkin party a couple of my beer nerd friends and I had a pumpkin beer tasting. The unanimous winner was Unita - Oaked Jacked Imperial Pumpkin Ale. It was a pumpkin ale that was aged in spent bourbon barrels. I might try to replicate something like that next year for the pumpkin party, or perhaps something along the lines of a Midnight Sun - Treat, which is a chocolate imperial pumpkin ale.

Appearance:  Slightly hazy orange-amber with yellow hues around the edges and a thick, fluffy off white head about two fingers thick with decent head retention that forms a thin ring around the center with patchy lacing.

Aroma: Subtle spice notes, cinnamon being the dominate with hints of clove, allspice and nutmeg. There are some nice malty notes that come through, but not as bready as I was hoping for and not much gourd.

Taste: Spicy up front with again cinnamon taking the lead and complimented by allspice and nutmeg. There are some nice malty flavors and a hint of fruitiness. Like the aroma there is not much gourd flavor.

Mouthfeel: Medium bodied with medium carbonation and a slightly sweet finish. I’m pleased with the carbonation level and the body of this beer.

Overall: I’m very pleased with how my first pumpkin ale turned out. I was mostly concerned with over spicing the beer and making it undrinkable. I think I did a good job in adding a small amount of spices at first, knowing that I could always add more, but couldn’t take any out. Next time I want to attempt to produce more gourd flavor/ aroma. I will either attempt to add more pumpkin using the procedure I mentioned above or (possibly both) adding a small amount of lactose. The Bruery does this with their Provisions Series: Burly Gourd. I personally don’t normally like lactose in my beers, but this one gave it, in my opinion, an increase perception of gourd flavor and aroma. Next year I’ll plan ahead a little bit better so our pumpkin party can actually be during pumpkin season.
Posted by James at 8:36 AM