About two weeks ago I decided it was time to wax the beer bottles I have in my cellar. Most of the beers in there I don’t plan on aging for that long; however, it doesn’t hurt to still wax the tops since I had a pound of wax.  I purchased the wax pellets from my LHBS.

It’s fairly common to find breweries that wax the tops of their bottles, generally this is done for special release bottle, beers that are meant to be aged. The reason for this waxing is to create an air proof seal between the bottle cap and the bottle. Usually air can slowly enter a beer through the seal of a bottle cap, very slowly; however, over a large amount of time this can cause oxidation off flavors and aromas in your beer. I wanted to wax some of the bottles that I was planning on aging, because that brewery, for whatever reason, uses twist-off caps. Those caps are notorious for not creating a tight seal.

I generally would recommend if you are planning on aging a beer for 2+ years that it is good to wax the cap to prevent oxidation. I had the time and the wax so I decided to go ahead and wax pretty much all of my beers. 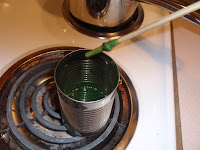 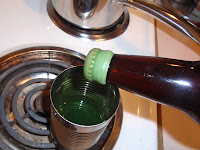 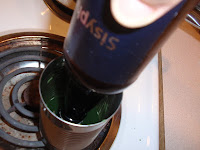 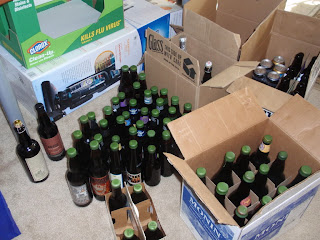 We used about two thirds of the wax, maybe, and waxed probably over 200 bottles.
Posted by James at 11:59 AM