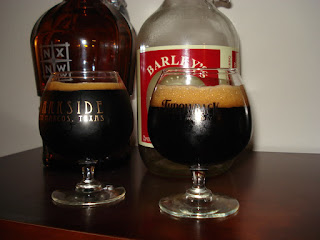 Founders is on the left and my home brew is on the right.

Not too long ago I mentioned how I don’t like cloning beers. I will clone beers if, I can’t buy them off the shelves, or if they are one of the best examples of the style. Well I wanted to brew an imperial oatmeal stout with chocolate and coffee, what better beer to model then Founder’s breakfast stout. This recipe was not a true clone but it was a similar representation of the style. The biggest factor that I wanted to emulate was the coffee flavor and aroma. Sadly this was the part that I failed.

I was lucky enough to receive a Founder’s Breakfast Stout in the mail from a recent trade that was bottled on roughly the same day my home brew was bottled. This gave me a pretty good comparison between the two. To no surprise the commercial version had a much bigger coffee aroma and flavor. I think next time I’ll just add the beans into the secondary and take samples and bottle when I feel it’s where I want it.

I also found another option for the coffee addition while trying to research Surly Coffee Bender. Most brewers are mum about their coffee process, but I was able to find an interview with the brewer of Surly.
They mentioned using a cold press method for their coffee addition, however; instead of water, they used their beer.

Appearance: Black with a thick brown head about two fingers thick that lingers and slowly fades into a lacing over the top of the beer. Similar appearance to the Founder’s version, however; my home brew had better head retention. I can only assume this was due to their process for coffee addition.

Aroma: The FBS had a huge coffee aroma mixed with chocolate, roasted grains, and vanilla. My beer had a subtle coffee aroma with a big chocolate, mocha, vanilla, toffee aroma. (I might also cut back on the cocoa nibs)

Flavor: Again FBS had a great coffee flavor, complimented with chocolate, toffee, and roasted grains. My beer was much more chocolaty and roasty, with subtle coffee, toffee, and bready notes.

Mouthfeel: The FBS had medium-full body with low carbonation and a lingering coffee flavor. For some reason it appears that my bottles unevenly carbonated. I feel this is due to the way I split the batch and was not confident with how much was left (if I carbonated for 4 gallons and only had 3.5 gallons, it would over carbonate, which I think is what happened). Once degassed a little the mouth feel is medium-full with a lingering chocolate, mocha finish.

Overall: Although it was not the same I’m actually very happy with how this beer turned out. I still want to work on the coffee addition method. I might split my next RIS and test a separate coffee method.
Posted by James at 8:06 AM