Last weekend I brewed a pumpkin ale for the first time. I’ve heard a lot of people say that you don’t need to add pumpkin, since pumpkin has such a mild taste. All you need to do is add pumpkin pie spices and you get the affect of drinking pumpkin pie. Although I wanted the spices, I also wanted a little pumpkin, gourd, taste. 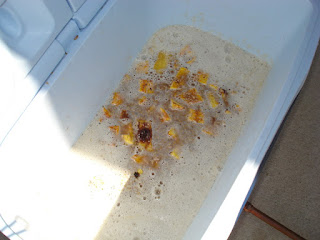 Most people also say that there is a real problem with stuck sparges with pumpkin in the mash, which is another reason they avoid it. I was prepared for this and bought a lot of rice hulls. During my lautering I did not experience any trouble with a stuck sparge.

Before I started brewing I sliced up the pumpkin and roasted it at 400F for 40 minutes. I wanted to use 3 lbs of pumpkin, honestly, I’m not sure how much I used due to my lack of a scale. The pumpkin itself weighed about 8lbs, assuming I can only extract half of that weight in pumpkin meat, I was left with 4 lbs. I could only fit so much in our oven, so about 1/4 of it was left out. This should leave me with around 3 lbs. That amount seems pretty accurate because I used the scientific method of holding a 2lb bad of sugar in my hand and the pumpkin in my other hand, the pumpkin seemed heaver. 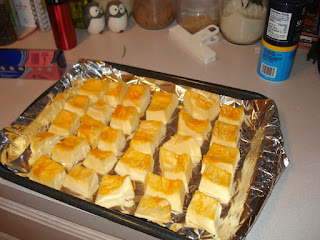 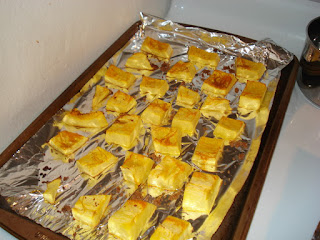 If there is not as much pumpkin flavor as I would like I might add some to secondary. With the left over pumpkin, I put that into our food processor and made some pumpkin puree. We then used the pumpkin puree for pumpkin corn bread, which is also very tasty and a great snack while I’m at work.
For some reason my final volume was higher then what I was targeting. I’m assuming my boil off rate was lower. I guess the boil was not vigorous enough. This in return lowered my original gravity. I just left it alone, because I’m not concerned with 0.007 points. I also went with a longer mash in an effort to increase my efficiency by allowing the water more time to reach dry spots and convert starches. I also went with a double batch sparge technique again. My pre-boil gravity was right where I wanted to be, thus, I was 75% efficient while mashing, but ended up being 69% efficient overall.

Stats
Ingredients
Hops (Pellet)
Mash Schedule
Yeast
Extras
Notes
(10/2/11) - Brewed by myself. I added the sugar at the last 25 minutes hoping for a little extra flavor from some caramelization. The yeast nutrient and Irish moss were added in the last 15 minutes. The spices were added with the last hop addition. I cooled to 80 degrees, shook to aerate, and pitched the yeast from a starter I made two days before.

(10/3/11) - A nice thick krausen has formed about 24 hours after pitching. The spices are present but they don’t seem overwhelming.

(10/15/11) - Gravity down to 1.011 with a nice subtle spice aroma just like I wanted. Not much pumpkin flavor but I’m not to picky about that. It might come out more as the spices fade.