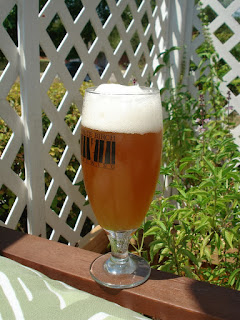 So this beer is named after our cat, who in return is named after another red head from the X-Files.  The recipe can be found here. This is the regular version, the sour version is still souring away.

Appearance: Light yellow-orange, a little hazy then I would have preferred. I meant to put Irish moss in at the last 15 minutes but I forgot. I’m not sure how much it would have helped. The head retention is insane, a huge rocky head about 3 fingers thick from a slow pour that very slowly fades, yet remains at least a centimeter thick through out the whole beer.

Aroma: Spicy and fruity, coriander, a subtle clove aroma mixed with pineapple, green apples and peaches. I’ve very pleased with how the aroma turned out. The only hops that I used were bittering hops, so all of the aroma was provided by the yeast.

Taste: Spicy and yeasty, with a touch of clove and peach. It might be a bit sweet but it’s not that big of a deal.

Mouthfeel: Perhaps a bit over carbonated. It took me a while to get around to review this beer because at first it was too over carbonated. It is either because I used too much priming sugar or because of the nature of this yeast it was not finished eating and then I added more sugar. It has calmed down since the first bottle I tried and is no longer gushing out of the bottle. The first few sips are still very bubbly but after a minute or two it calms down to a nice level of carbonation. I also would have preferred it to be a little drier and a little lighter in body.

Overall: I’m very pleased with how this beer turned out. The aroma is complex and very nice, the taste also has a nice level of complexity. It is a little over carbonated and a little too sweet. I mentioned the carbonation issue, but didn’t go into detail about the body. The body and sweetness comes from the unfermented sugars. Typically a Saison will terminate at 1.008 or lower, mine was bottled at 1.011, which probably accounted for the extra carbonation. The reason I bottled it at that at that gravity is because I was splitting the batch and wanted some sugars for the brett and bugs to eat. What I should have done is wait for the beer to hit a lower gravity, probably 1.008 or 1.006 and then split the batch. After splitting I would then add maltodextrin to the souring batch because brett loves to eat that stuff. Oh well, either way I’m happy with the way it turned out. Tasty and refreshing!
Posted by James at 6:25 AM