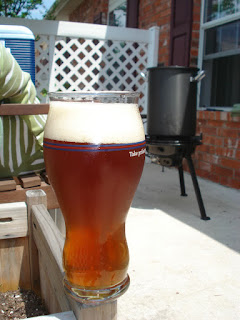 Vapor trails is named after the Rush album of the same title. I figured that since the style of beer is a Steam Beer, vapor worked well. That and I’m a big Rush nerd. Since the style guidelines are based off of Anchor’s Steam beer almost any deviation brings the beer out of style. I’m fine with that sacrifice since it’s a narrow guideline. I tried to replicate the color and the aroma, for the most part, by using Northern Brewer hops. I did, however, also want more flavors, something a little more robust. For that I changed the grist by adding some more toasty malt. I’ve very pleased with how this beer turned out and I’d say so far it’s the closest I’ve some to replicating commercial characteristics. I poured an Anchor Steam to do a little side by side comparison. The differences were noticeable, but not in a bad way. Their beer was clearer, but they have the advantage of a filter I assume and cold crashing. I have to leave yeast in the bottle. The other noticeable difference is the freshness and the toasty flavor that I added. I was also slightly surprised to find their beer to be dryer then mine, considering the FG that I got I was expecting it to be too dry.

Appearance: Pours a clear, slightly hazy, deep orange-amber with an off white heat with tightly packet bubbles about two fingers thick. Probably the clearest beer I’ve brewed to date, lager yeast can do wonders for appearance.

Aroma: Very floral and earthy from the Northern Brewer hops with a toasty caramel background.

Mouthfeel: Medium body and medium carbonation, the body is where I like it but more than Anchor’s version, but the carbonation is perfect.

Overall:  I really like this beer. I brewed it for my fiancée because it’s her favorite beer, but I like it too much and need to stop drinking them. Definitely something I would brew again. I might tweak the malt bill a little bit, other than that I like everything about it. The beer is a great spring beer and it would also make a great fall beer.
Posted by James at 8:07 AM